At the start of the match of World Cup Group C, between Colombia and Cote d’Ivoire which the South American side won 2-1, many people saw an intriguing scene during the national anthem of Cote d’Ivoire. In focus of the cameraman was Sereso Geoffroy Gonzaroua Die, known as Serey Die in tears. 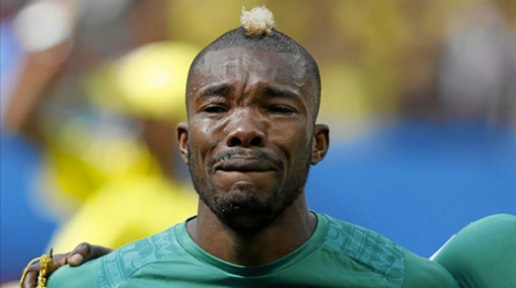 Even though Serey Die tried to hold back his tears, he failed to do as during the anthems Basel footballer started crying and so won the hearts of millions people across the globe. The English media reported that the reason for his tears was that his father has passed away, however player on his Instagram account explained.

“Hello, I just want to say that it’s wrong what they all say, that I was moved because of my dad, but he died in 2004 and it was just the excitement of being in a World Cup and serving my country, Ivory Coast. I never thought one day I would be at this level of competition.”

Ivory Coast player also apologized for the mistake that resulted in the second goal : “Sorry for my mistake, I apologize for having disappointed you. I’ll come out on top. God bless you – finished.”