The Cameroon left back , Assou-Ekotto head butted his team-mate Ben Moukandjo last night at the end of the match vs Croatia wich they lost 4-0. 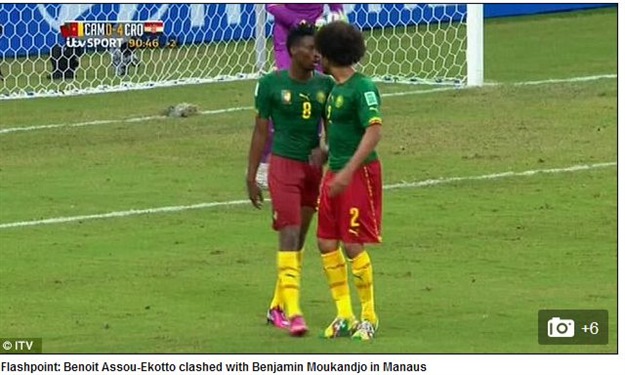 Nobody would ever expected Spain to get eliminated at group phase by Chile , but nobody would expect team mates fighting each other. That happened last night at Croatia vs Cameroon which finished 4-0 in the favour of Vatreni.

Ben Moukandjo was head butted at the final moments of the match by his team-mate , Assou-Ekotto. The referee and match officials missed this “incident” and Assou Ekotto escaped of being reprimanded.

Anyway , we’ve never seen him [Assou-Ekotto ] acting like that. The Cameroon left back plays for Tottenham but it was on load at QPR last season , making
27 apps , without scoring any goal.

Cameroon coach was angry about Ekotto gesture and said sorry about the low performance his team did put last night.

“It’s unimaginable,” the German told reporters. “I saw this happen and I need to find out exactly what happened, why exactly these two players exploded.

“I hate to see that. It’s not the image of Cameroon I want to project.

“I apologise for the result, it really hurts. We had no control on the game and I didn’t like the behaviour of my team. We have to look forward – this team does have players for the future.”

Cameroon is out of the tournament but they will still play the 3rd match of group stage vs Brazil.