The current World and Europe champion, Spain suffered one of their biggest defeats in recent history against the Netherlands who smashed 5 goals despite going behind with Xabi Alonso’s penalty. After that horrible start in opening round of this World Cup vs Netherlands , Del Bosque’s men are going to face a motivated Chile tonight at Maracana where anything but a win would be a major blow for the Spanish hopes. Another defeat would send them off home. 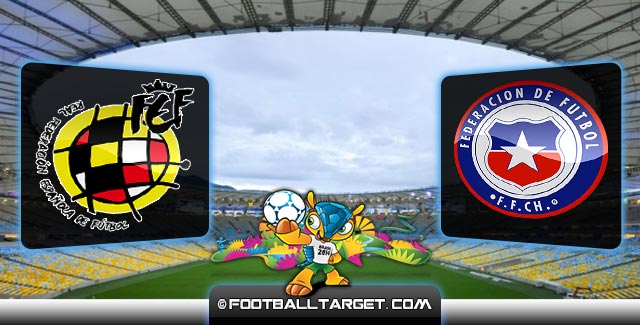 Spain
After the 5-1 defeat vs Netherlands , Del Bosque is expected to make some changes in the starting “XI” vs Chile.


Even though he made a lot of mistakes in the match vs Netherland , Casillas is still the favourite to start from the first minute. It wouldn’t be a surprise too , if Del Bosque decide to start De Gea , considering his good form with Manchester United this season.

Possible changes in defense may be :
Juanfran in for Cesar Azpilicueta. The Chelsea defender failed to put a good performance against Netherlands. Same may happen to Pique, so in that case he will be replaced by Martinez.

Meanwhile in midfield Koke seems favourite over Xavi to be from the start. Busquets and Xabi Alonso seems to be the other two members of the centre midfield while Pedro and Iniesta will take their places on the wings.

In attack  it seems that Del Bosque  again will start with Diego Costa.  The Atletico Madrid striker does not seems to be the right one for the Tiki – Taka style that Spain uses, since the los Colchoneros are an anti-Tiki- Taka team.

Chile :
Unlike Spain , Chile had a succsessful start of this competition where they won 3-1 in the opening game vs Australia.

Jorge Sampaoli seems to be decided to face Spain with the same lineup as he faced Australia. He is confident that his team can kick Spain out of the World Cup.

Once again Sanchez is going to be their key player as a fake 10 , a role that he managed and performed great vs Australia.

The only changes possible may be Vidal for Gutierrez, since Juventus midfielder seems to be slightly injured.

If Spain fails to win tonight , they will be out of the World Cup.